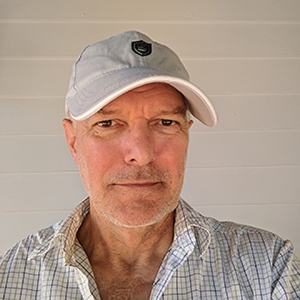 This article is a bit overdue (approximately 11 months, in fact!) but we’re seriously going to catch up on introducing the Intopia team members. Here’s a bit of insight into Ricky Onsman.

When did you join the team?

I joined Intopia at the end of March 2018, I’ve been here just under a year.

Tell us a bit about your work history that led you here.

Well, I was born with a hearing impairment. I’ve never identified as a person with a disability, but my hearing difficulties have given me some insight into accessibility. When I was an actor in the 1980s, I worked with the Theatre of the Deaf (as a hearing actor), and then ran drama workshops for young adults with intellectual disability.

In the 90s, I ran an information service for people with disability in eastern Sydney, answering thousands of queries about support options, access issues, rights issues and lots more. When I became a web designer, it seemed obvious to make sure my websites were as accessible as they could be – which was a lot easier in those days.

That, in turn, led me to working with several organisations that focus on web accessibility and, eventually, Intopia.

What are you looking forward to working on in your new role at Intopia?

I originally joined as a Digital Accessibility Consultant to conduct accessibility testing of commercial clients plus related activities like usability testing with people with disabilities. Opportunities arose to put some of my marketing, content and web design and development skills into action for Intopia, and I sort of slid sideways into taking responsibility for Intopia’s Marketing & Communications, which is both incredibly exciting and a bit daunting.

Hopefully, I still get to undertake some accessibility audits every now and then.

What are any significant milestones/highlights of your time in the accessibility sector so far?

Working at the Disability Information & Referral Centre was a revelation. This was during the time of deinstitutionalisation of people with intellectual disabilities into group homes, the development of the Disability Services Act and then the Disability Discrimination Act. Advocacy was a raging topic, and disability rights became a real thing.

When the web came along, the potential for benefiting the lives of people with disability was immediately obvious. I built my first website for DIRC in 1994. The power of the information I could bring to so many more people was truly exciting. And almost immediately, the issue of making internet-based information available to people with physical, intellectual, psychiatric and sensory disabilities became a serious issue.

What do you see as a high priority for creating a world without digital barriers?

We let ourselves push accessibility into a “special needs” corner for dealing with “edge case” scenarios. This is so far from the truth, it’s ridiculous. Disability affects everybody, accessibility benefits everybody – both should be considered a normal part of everyday life, and that very much includes the digital world.

What advice would you give to someone facing roadblocks implementing accessibility/digital inclusion in their work?

Do it. Don’t ask permission. Assume that accessibility is part of your job – because it is, whatever your job specifications! Asking your bosses whether you should put time and effort into making whatever you’re working on accessible will only confuse them. Help them out by making your work accessible as a matter of course.

Have some facts to hand in case you’re asked to justify yourself: the law requires accessibility, the business case is undeniable, the PR value in being known to be accessible is considerable, the moral obligations can’t be ignored.

I reckon if every web and app developer and product manager just started applying accessible techniques in their work, in the same way that every web designer started implementing responsive web design (and that took just four years to go from being a good idea to being assumed), inaccessible digital interfaces would quickly become a thing of the past, or at least the exceptions rather than the rule.

Lastly, tell us one fun random fact about yourself.

I was born in Fryslân, in the north of the Netherlands: home of black and white Friesian cows, giant black Frisian horses, some of the weirdest sports you’ll ever see, and the Frys language – which even the Dutch can’t understand.

Getting to know you – Vanessa

Continuing the series of helping you get to know our awesome team, meet Vanessa Grech! Ness is one of our latest recruits, having joined us in October 2019. We sat down with Ness to ask about her career highlights thus far, what drew her to the field of accessibility, and…

Can I use Firefox with JAWS and/or NVDA?

TL;DR “Yes, if you’re using the latest versions.” Back in November last year, we advised JAWS and NVDA screen reader users not to upgrade to Firefox Quantum (version 57). The multiprocess technology introduced in this version by Mozilla (the organisation behind Firefox) to speed up overall browser performance was causing…